While in-water hull cleaning is not new, Envirocart™ is the only system that captures, contains and filters marine biofouling without polluting the surrounding marine environment.

History is littered with examples of biofouling containing non-indigenous marine species being unwittingly introduced to delicate marine eco-systems. The Crown of Thorns starfish, native to the Indo-Pacific region, continues to cause damage to the Great Barrier Reef. According to research by the Australian Institute of Marine Science, coral cover on surveyed reefs has declined by about 50 per cent over the past 30 years, with half of this attributed to the Crown of Thorns.

Other examples include the Northern Pacific Sea Star, which originated in northeast Asia and has devastated the seafloor in Victorias Port Phillip Bay; and the European Shore Crab, a voracious predator that continues to attack shellfish beds and disrupt ecosystems along Australia’s east coast.

Once established, these species are almost impossible to eradicate so prevention must be the focus of any Authority. 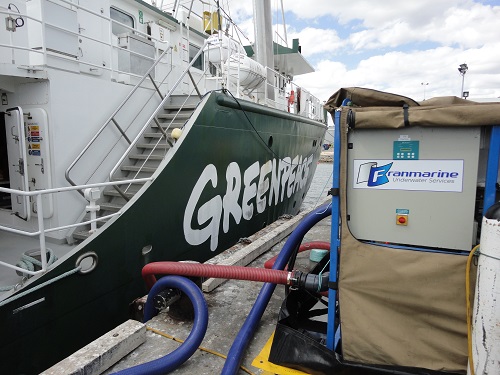 While any hull clean will remove the habitat for an invasive species and reduce the potential for them to reach reproductive maturity, only Envirocart™ has a unique complete capture, containment and filtration system to prevent the catastrophe that can occur when biofouling is leaked back into the water.

Carbon dioxide (CO2) is naturally present in the atmosphere. However, human activities – including the combustion of fossil fuels such as gasoline and diesel to transport people and goods – have lifted it to dangerously high levels.

The most effective way to reduce CO2 emissions is to reduce the amount of fossil fuel consumed and in shipping, this can be done quickly and easily by removing biofouling from the hull to reduce drag.

By using the Envirocart™ system, you will not only reduce your fuel costs and travel time, you will cause less damage to the environment by reducing the amount of CO2 emissions released into the atmosphere.

There are two main types of marine anti-fouling paints used to prevent biofouling build up.

Biocide-based paints are the most common. They erode gradually over time, giving rise to a slow, but controlled release of biocides into the water. These types of paints include heavy metal additives, such as copper and zinc. Copper has a longstanding tradition as a biocide in anti-fouling paints but it is highly toxic and can be harmful to most organisms including humans.

Biocide-free paints are better for the environment and are typically silicon based. They form a smooth, non-stick surface on the hull which makes it difficult for biofouling organisms to attach.

However, neither is 100% effective. They both need to be re-coated on a regular basis and both allow biofouling to build up – albeit at a slower rate, meaning hulls still need to be cleaned.

In the past, biofouling was removed using abrasive wire brushes and high pressure water blasting. While these methods work, they come with consequences. These aggressive techniques damage the anti-fouling, which causes the toxic biocides contained in the paint to be released into the water. It also damages the softer biocide-free paints, reducing their effectiveness.

In contrast, the blades of the Envirocart™ never make contact with the surface, so the anti-foul paint is undamaged, and instead of being washed into the water, the biofouling is captured and contained.

Our environment is precious and Envirocart™ will ensure it remains that way.

Do you have any questions? Drop us a line. We’d love to hear from you.

Return home to see all we offer.